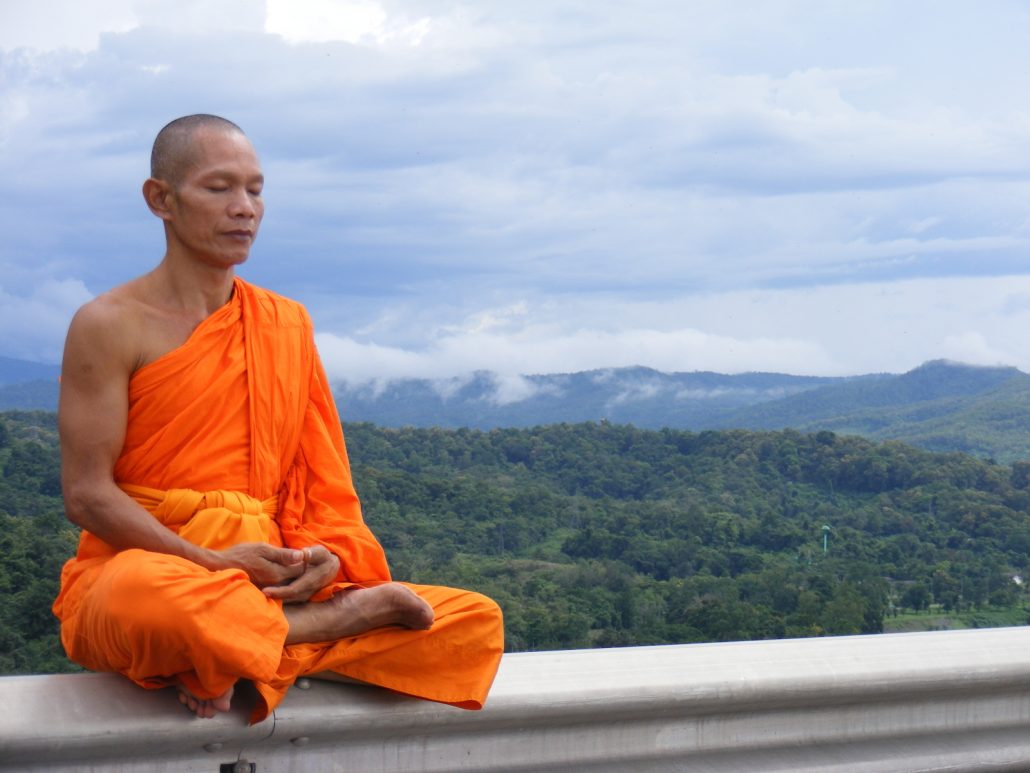 I mentioned earlier that I am attending meditation classes. It is early days for me and I have difficulties in areas that you might not expect. I am very comfortable with the mind components of meditation but my body seems unwilling to readily adopt traditional meditation poses. After 30 minutes I start to experience pain.

As you could imagine, for one who has never been flexible enough to touch my toes, a full lotus position seems anatomically impossible for me. I think I need to embark on a program of stretching and conditioning. It may take months.

The pain distracts me after 30 minutes. I have managed to get my right leg pain controlled with focus for another ten minutes. The worst focus of the pain is in my left hip. That pain I am yet to ignore or manage with targeted focus.

Luang Por Pumee knew of my struggle. In the discussion after meditation and without prompting, Luang Por said that when he was a novice monk he experienced pain when trying to meditate for an hour. The focus of the mind helps remove the sensation of pain. Something that I am yet to master. It is early days and this is one of my challenges.

I am going to stretch, practice and use SCENAR / PhysioKey application to train my body to do what it needs to do. I am going to train my mind to ignore the pain that these techniques cannot remove.

I have set myself a goal of two months to be focussed without moving for one hour. I hope that in four months I can do two hours and in six months I want to be able to do three hours. Let us see how I go.

Next month the 8 week course kindly offered by Rosemary and Steve weissman at the temple begins. I am attending that course. You can attend the course at Wat Sangharatanaram in Nerang by registering with an email to Steve & Rosemary Weissman teachers@rosemary-steve.org

Core meditation techniques have been preserved in ancient Buddhist texts and have proliferated and diversified through teacher-student transmissions. Buddhists pursue meditation as part of the path toward Enlightenment and Nirvana.

The closest words for meditation in the classical languages of Buddhism are bhāvanā and jhāna/dhyāna.

Buddhist meditation techniques have become increasingly popular in the wider world, with many non-Buddhists taking them up for a variety of reasons.

Specific Buddhist meditation techniques have also been used to remove unwholesome qualities thought to be impediments to spiritual liberation, such loving kindness to remove ill-will, hate, and anger, equanimity to remove mental clinging, and reflection on 31-parts-of-the-body to remove sensual lust for the body and cultivate annica or impermanence.

Meditation on the Buddhist Path

Most Buddhist traditions recognize that the path to Enlightenment entails three types of training: virtue (sīla); meditation (samadhi); and, wisdom (paññā). Thus, meditative prowess alone is not sufficient; it is but one part of the path. In other words, in Buddhism, in tandem with mental cultivation, ethical development and wise understanding are also necessary for the attainment of the highest goal.

The earliest tradition of Buddhist practice is preserved in the nikāya/āgamas, and is adhered to by the Theravāda lineage. It was also the focus of the other now-extinct early Buddhist schools, and has been incorporated to greater and lesser degrees into the Tibetan Buddhist tradition and many East Asian Mahāyāna traditions.

In terms of early traditions as found in the vast Pali canon and the Āgamas, meditation can be contextualized as part of the Noble Eightfold Path, explicitly in regard to:

And implicitly in regard to :

In the Satipatthana Sutta, the Buddha identifies four foundations for mindfulness: the body, feelings, mind states and mental objects. He further enumerates the following objects as bases for the meditative development of mindfulness:

Meditation on these subjects develops insight.

The Buddha is said to have identified two paramount mental qualities that arise from wholesome meditative practice:

Through the meditative development of serenity, one is able to suppress obscuring hindrances; and, with the suppression of the hindrances, it is through the meditative development of insight that one gains liberating wisdom. Moreover, the Buddha is said to have extolled serenity and insight as conduits for attaining Nibbana (Pali; Skt.: Nirvana), the unconditioned state as in the “Kimsuka Tree Sutta” (SN 35.245), where the Buddha provides an elaborate metaphor in which serenity and insight are “the swift pair of messengers” who deliver the message of Nibbana via the Noble Eightfold Path.

In the “Four Ways to Arahantship Sutta” (AN 4.170), Ven. Ananda reports that people attain arahantship using serenity and insight in one of three ways:

Particularly influential from the twentieth century onward has been the “Vipassana School” approach to samatha and vipassana developed by Mingun Jetavana Sayādaw and U Nārada and popularized by Mahasi Sayadaw. Here samatha is considered an optional but not necessary component of the practice—vipassana is possible without it.

Also influential is the Thai Forest Tradition deriving from Ajahn Mun and popularized by Ajahn Chah, which, in contrast, stresses the inseparability of the two practices, and the essential necessity of both practices. Other noted practitioners in this tradition include Ajahn Thate and Ajahn Maha Bua, among others.

Another less common type of meditation is practiced in Cambodia and Laos by followers of Tantric Theravada. This form of meditation includes the use of mantras and visualizations.

Text reviewed and edited from https://en.wikipedia.org/wiki/Buddhist_meditation and will be used to explore concepts and texts. The task I have set myself is to verify what is said here and confirm practice myself.

My day at the Temple