You are here: Home / Language / Pali / The Bodhi Tree 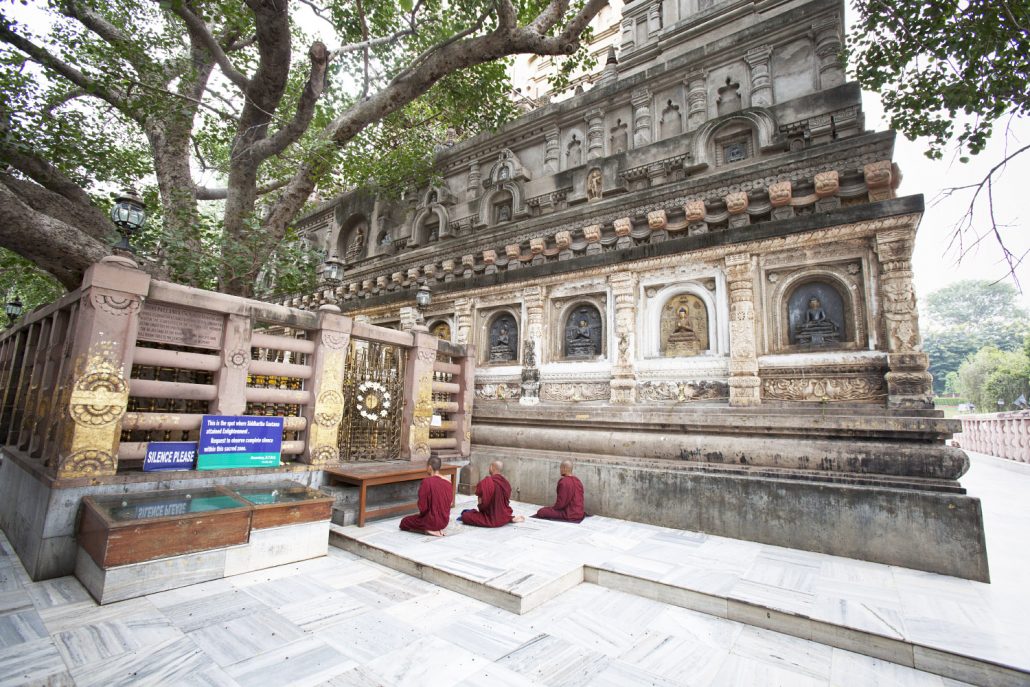 Ficus religiosa or sacred fig (Pali — assattha; rukkha) is a species of fig native to the Indian subcontinent, and Indochina. It belongs to the Moraceae, the fig or mulberry family. It is also known as the bodhi tree, pippala tree, peepul tree, peepal tree or ashwattha tree (in India and Nepal).

Ficus religiosa is a large dry season-deciduous or semi-evergreen tree up to 30 metres (98 ft) tall and with a trunk diameter of up to 3 metres (9.8 ft). The leaves are cordate in shape with a distinctive extended drip tip; they are 10–17 cm long and 8–12 cm broad, with a 6–10 cm petiole.

The fruits are small figs 1–1.5 cm in diameter, green ripening to purple. The leaves of this tree move continuously even when the air around is still and no perceptible wind is blowing.

This phenomenon can be explained due to the long leaf stalk and the broad leaf structure. However, religious minded people in Hindu/Buddhist religion attribute this movement of the leaves to the fact that “devas” or “gods” reside on these leaves and make it move continuously.

The Ficus religiosa tree is considered sacred by the followers of Hinduism, Jainism and Buddhism.

Gautama Buddha attained enlightenment (bodhi) while meditating underneath a Ficus religiosa. The site is in present-day Bodh Gaya in Bihar, India.

In Theravada Buddhist Southeast Asia, the tree’s massive trunk is often the site of Buddhist or animist shrines. Not all Ficus religiosa can be called a Bodhi Tree. A Bodhi Tree must be able to trace its parent to another Bodhi Tree and the line goes on until the first Bodhi Tree under which Gautama is said to have gained enlightenment.

Bodhirukka – The generic name given to the tree under which a Buddha attains Enlightenment (D.A.ii.416). The tree is different in the case of each Buddha. Thus,

The site of the Bodhi tree is the same for all Buddhas (BuA.247), and it forms the navel of the earth (J.iv.233) (puthuvinābhi). No other place can support the weight of the Buddha’s attainment. J.iv.229.

When no Bodhi tree grows, the Bodhimanda (ground round the Bodhi-tree), for a distance of one royal karīsa, is devoid of all plants, even of any blade of grass, and is quite smooth, spread with sand like a silver plate, while all around it are grass, creepers and trees. None can travel in the air immediately above it, not even Sakka (J.iv.232f).

When the world is destroyed at the end of a kappa, the Bodhimanda is the last spot to disappear; when the world emerges into existence again, it is the first to appear. A lotus springs there bringing it into view and if during the kappa thus begun a Buddha will be born, the lotus puts forth flowers, according to the number of Buddhas (DA.ii.412).

In the case of Gotama Buddha, his Bodhi tree sprang up on the day he was born (DA.ii.425; BuA.248). After his Enlightenment, he spent a whole week in front of it, standing with unblinking eyes, gazing at it with gratitude. A shrine was later erected on the spot where he so stood, and was called the Animisalocana cetiya (q.v.). The spot was used as a shrine even in the lifetime of the Buddha, the only shrine that could be so used. While the Buddha was yet alive, in order that people might make their offerings in the name of the Buddha when he was away on pilgrimage, he sanctioned the planting of a seed from the Bodhi tree in Gayā in front of the gateway of Jetavana. For this purpose Moggallāna took a fruit from a tree at Gayā as it dropped from its stalk, before it reached the ground. It was planted in a golden jar by Anāthapindika with great pomp and ceremony. A sapling immediately sprouted forth, fifty cubits high, and in order to consecrate it the Buddha spent one night under it, wrapt in meditation. This tree, because it was planted under the direction of Ananda, came to be known as the Ananda Bodhi (J.iv.228ff).

According to the Ceylon Chronicles (e.g., Mhv.xv), branches from the Bodhi trees of all the Buddhas born during this kappa were planted in Ceylon on the spot where the sacred Bodhi tree stands today in Anurādhapura. The branch of Kakusandha’s tree was brought by a nun called Rucānandā, Konagamana’s by Kantakānandā (or Kanakadattā), and Kassapa’s by Sudhammā. Asoka was most diligent in paying homage to the Bodhi tree, and held a festival every year in its honour in the month of Kattika (Mhv.xvii.17). His queen, Tissarakkhā was jealous of the Tree, and three years after she became queen (i.e., in the nineteenth year of Asoka’s reign), she caused the tree to be killed by means of mandu thorns (Mhv.xx.4f). The tree, however, grew again, and a great monastery was attached to the Bodhimanda. Among those present at the foundation of the Mahā Thūpa are mentioned thirty thousand monks, from this Vihāra, led by Cittagutta (Mhv.xxix.41).

Kittisirimegha of Ceylon, contemporary of Samudragupta, erected with the permission of Samudragupta, a Sanghārāma near the Mahābodhi-vihāra, chiefly for the use of the Singhalese monks who went to worship the Bodhi tree. The circumstances in connection with the Sanghārāma are given by Hiouen Thsang (Beal, op. cit., 133ff) who gives a description of it as seen by himself. It was probably here that Buddhaghosa met the Elder Revata who persuaded him to come to Ceylon.

In the twelfth year of Asoka’s reign the right branch of the Bodhi tree was brought by Sanghamittā to Anurādhapura and placed by Devānāmpiyatissa in the Mahāmeghavana. The Buddha, on his death bed, had resolved five things, one being that the branch which should be taken to Ceylon should detach itself (Mhv.xvii.46f). From Gayā, the branch was taken to Pātaliputta, thence to Tāmalittī, where it was placed in a ship and taken to Jambukola, across the sea; finally it arrived at Anurādhapura, staying on the way at Tivakka. Those who assisted the king at the ceremony of the planting of the Tree were the nobles of Kājaragāma and of Candanagāma and of Tivakka. From the seeds of a fruit which grew on the tree sprang eight saplings, which were planted respectively

at Jambukola,
in the village of Tivakka,
at Thūpārāmā,
at Issaramanārāma,
in the court of the Pathamacetiya,
in Cetiyagiri,
in Kājaragāma and
in Candanagāma (Mhv.xix.60ff.; for details in connection with the bringing of the Bodhitree, see Mbv.144 ff).
Thirty-two other saplings, from four other fruits, were planted here and there at a distance of one yojana. Ceremonies were instituted in honour of the Tree, the supervision of which was given over to Bodhāhārakula, at the head of which were the eight ministers of Asoka who, led by Bodhigutta and Sumitta (see Mbv.165f., for the names of the others), were sent as escorts of the Tree. Revenues were provided for these celebrations.

Later, King Dhātusena built a Bodhighara or roof over the Tree (Cv.xxxviii.431) while Silākāla made daily offerings at the shrine (see Cv.Trs.i.32, n. 6; Cv.xli.29), and Kittisirimegha had the Bodhighara covered with tin plates (Cv.xli.65). Mahānāga had the roof of the Bodhighara gilded, built a trench round the courtyard and set up Buddha images in the image house (Cv.xli.94). Aggabodhi I. erected a stone terrace round the Tree and placed, at the bottom of it, an oil pit to receive the oil for illuminations on festival days (Cv.xlii.19). Aggabodhi II. had a well dug for the use of pilgrims (Cv.xlii.66), and Moggallāna III. held a great celebration in the Tree’s honour (Cv.xliv.45).

Aggabodhi VII found the Bodhighara in ruins and had it rebuilt (Cv.xlviii.70); Mahinda II instituted a regular offering in its honour (Cv.xlviii.124), and Udaya III gave a village near Anurādhapura to the service of the Bodhi tree. Cv.liii.10.

Chanting – The Beginning
Scroll to top